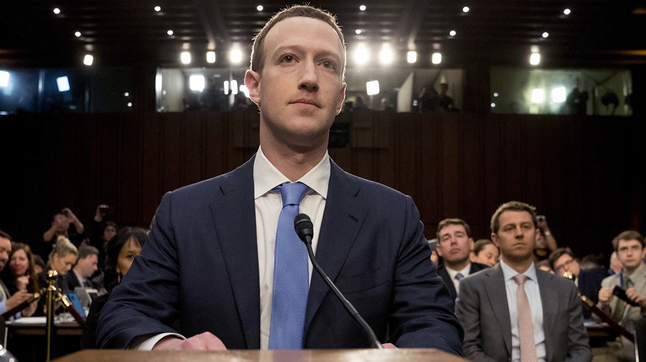 Facebook data scandal: Can Zuckerberg get away scot-free from Congress?

This piece was originally published on Noted.co.nz

Facebook founder Mark Zuckerberg has survived his first appearance before the US Congress, a carefully prepared list of talking points getting him through politicians’ questions on the Cambridge Analytica scandal, Russian misinformation campaigns and hate speech on his platform.

Zuckerberg seemed more nervous reading out his pre-prepared testimony than answering questions from the senators of a combined panel of two Senate committees. Maybe that’s because he sensed early on the lack of real understanding among the ageing group of senators of how Facebook works.

Only senator Richard Blumenthal, a Democrat from Connecticut, got close to the heart of the matter when he produced the terms and conditions of Facebook’s agreement with Aleksandr Kogan, the Cambridge University academic and data scientist who passed on information on up to 87 million Facebook users to Cambridge Analytica.

Those terms show Kogan gained authority from someone in Facebook to disseminate and even sell that data.

“What happened here was in effect willful blindness – it was heedless and reckless,” Senator Blumenthal said.

No one at Facebook has been fired over the Cambridge Analytica saga, according to the Zuck.

But the obvious question went unanswered – will Facebook stop its practice of allowing large amounts of users’ data to pass into the hands of third-party researchers and companies?

Rather than merely auditing its relationships with these companies and the thousands of apps they run on Facebook, gathering information from the profiles of Facebook users in the process, Facebook should be locking down those apps to give the bare minimum details to allow Facebook users to simply log them into services like AirBnB and Uber.

But it won’t do that, because sharing information to enable the services that keep the average user spending around 50 minutes a day on Facebook, is critical to the social network’s vastly profitable business model of selling highly-targeted advertisements.

“Advertisers and developers will never take priority…as long as I run Facebook,” an emphatic Zuckerberg told the senators.

But that is clearly what has happened on more than one occasion in Facebook’s evolution from Harvard dorm room start-up to an operation with two billion users.

The key issue then is whether people know exactly what they are signing up for when they use Facebook and much of the senators’ questions focused on the terms and conditions and disclosures of data usage Facebook presents its users with.

“It’s hard to say that people fully understand something when it’s only written out in a long legal document,” Zuckerberg admitted. That was one key area he identified where new legislation could “codify” how data policies could be applied across the tech companies.

But as expected, he was wary of new regulations, suggesting his tiny little start-up wouldn’t have got off the ground under a tight regulatory regime around data privacy.

“We still need to make it so that American companies can innovate or we will fall behind Chinese companies,” Zuckerberg told them.

He has already said he will implement the provisions of the General Data Protection Regulation (GDPR) that the European Union will start enforcing from May 25 and which introduces a host of tough measures designed to protect the data privacy of Europeans, backed up with stiff fines for transgressions.

He accepted that the EU provision requiring victims of serious data breaches be notified within 72 hours, was worth considering in the US.

But artificial intelligence is the answer to many of Facebook’s woes, said Zuckerberg.

While he said 20,000 people at Facebook will be tasked with content moderation and security by the end of the year, new AI techniques will be required to police the 100 billion posts to Facebook, Whatsapp and Instagram everyday, to keep app developers honest and stop fake accounts spewing out political misinformation.

His priority for this year is making sure Facebook isn’t used to manipulate elections around the world in the way that Russian actors did in the 2016 US presidential election.

“One of my greatest regrets in running the company was we were slow in identifying the Russian information operations,” said Zuckerberg as the self-flagellation before the senators continued.

Ultimately Zuckerberg came out of his first Capitol Hill appearance about as well as he could have. But the clear tone of questioning suggests that across the political spectrum, the feeling is that Facebook’s self-regulation isn’t working, that Facebook has got too big, too powerful.

“Are you a monopoly?” Zuckerberg was asked at one point.

“It certainly doesn’t feel like it to me,” he responded.

The billions in profits and vast treasure trove of data Facebook has access to would seem to suggest otherwise.

Meanwhile, as you log into Facebook over the next couple of days – it hasn’t arrived on my newsfeed yet – you’ll likely see an alert atop your newsfeed, a message duplicated billions of times the world over in an effort to rebuild trust in the social network.

But the new blue pop-up on your newsfeed will confirm one way or another whether you are among the 64,000, and offer a chance to consider what your future relationship with the world’s largest social network will be.

The country’s Privacy Commissioner, John Edwards’ decision was to delete Facebook. He advised that the only way for others to avoid having their data harvested for unauthorised purposes is to do likewise.

Edwards’ choice was a stark one. Many have invested a lot of time in their presence on Facebook. Leaving isn’t an attractive option for many. But we should all be asking ourselves, as we watch the 33-year-old billionaire in his crumpled blue suit conduct yet another “apology tour”, whether he can make the changes to rebuild trust in Facebook.