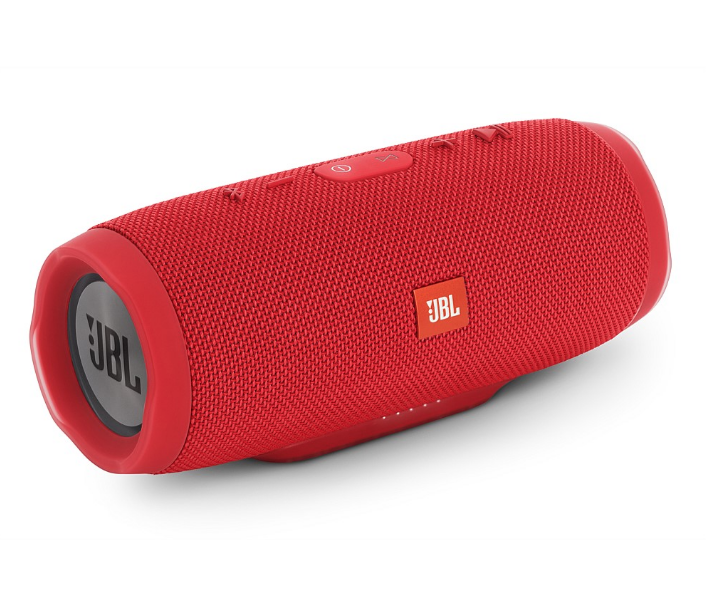 This is a Sciblogs series running through until Christmas Eve highlighting some of the gadgets we’ve been using this year… gadget No. 9

When I went into JB Hi-Fi a few days ago to pick up a wireless speaker to ensure we had a suitable Christmas soundtrack for the staff party, I had to queue to access the wireless speaker section.

What is not to like about wireless speakers? You can take them anywhere, they stream music from your phone and some even let you have speakerphone conversations without touching your phone. They are the prefect Christmas gift.

At home I have two Sony SRS-X3 Bluetooth speakers that do a great job of giving me stereo sound in my small apartment – and I take them away to my crib up the coast for some relaxed background music while I’m lounging on the deck up there.

I was expecting to pick up another Sony for the office, but instead became enamored with the JBL Charge 3. It’s a bigger model than the standard line-up of speakers in the UE Boom and Sony line-up. I wanted that for the extra punch we need at the office for our parties, where the room quickly fills with the noise of jabbering colleagues.

The Charge 3 delivered rich, deep bass when I pressed the button bringing it to life in the shop. The two 10W speakers will fill a reasonable sized room with good, clear audio – seemingly plenty of volume.

However, when I played my Spotify Christmas playlist later on, the Charge 3 was straining to compete with the crowd. That’s not a failing of it as such, but I expected better cut-through from the larger speaker.

Nevertheless, the Charge 3 is impressively built with a nice woven fabric material that looks quite fetching in deep red. It also has a handsome range of features. It is waterproof to the extent that it can briefly be submerged – great if you accidentally knock it into the swimming pool. It functions as a speakerphone to good effect and can be networked with other Charge speakers via the JBL app for surround sound. That’s when these speakers come into their own – when you have two or three of them working together.

You can also use it to charge your other gadgets via the USB port.

Play time from the lithium-ion battery is an impressive 20 hours.

Set-up, syncing and initial playback was incredibly easy – the way it should be when a party needs a soundtrack.

My research suggests the Charge 3 isn’t the jump up in audio quality of the Charge 2+ many expected. Having not listened to the Charge 2+ I can’t relate to that, but the Charge 3 does have great volume and noticeably rich bass. A couple of these working together would really get the party started.