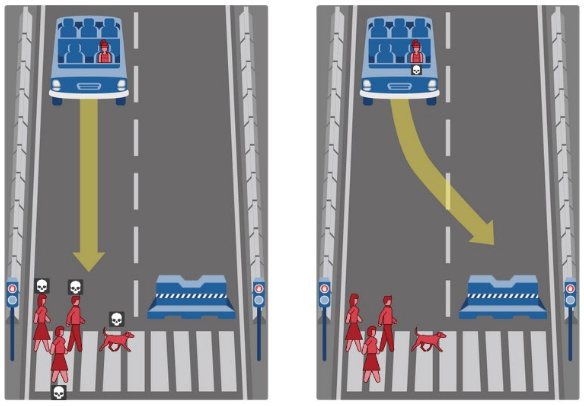 Choosing who to kill – the moral dilemma with driverless cars

Should a car swerve to miss a pedestrian on the road, even if doing so would kill the passenger? What if it was two people on the road? Or ten people?

New US research, published in Science, explores this ethical dilemma in a series of surveys, revealing that people generally want automated cars to be utilitarian (i.e. prevent the greatest loss of life) but when pressed, admit that they would prefer to buy a driverless car that protects the driver at all costs.

“Most people want to live in in a world where cars will minimize casualties,” says Iyad Rahwan, an associate professor in the MIT Media Lab and co-author of a new paper outlining the study. “But everybody wants their own car to protect them at all costs.”

Regulation may provide a solution to this problem, the authors say, but their results also indicate that requiring cars to be utilitarian could “substantially delay” the adoption of the vehicles leading to more deaths from human-caused accidents in traditional cars in the meantime.

New Zealand researchers agreed that the issue would need to be addressed in the near future.

“We need to decide how much control we give to machines and as machines are used more extensively in our lives this question becomes more central,” Unitec Professor Hossein Sarrafzadeh told the Science Media Centre.

“This is an example of a global issue which is best studied using a transdisciplinary approach. More work needs to be done by social scientists, computer scientists, engineers, insurance companies and those involved in legislation.”

Want to find out where you stand? The Moral Machine, an interactive website created by the MIT researchers, allows users to explore different scenarios and make moral judgements on how a vehicle should respond in a crash situation.